When I'm not writing about my experiences in this journey called 'life', I'm singing and uploading my own interpretations of modern music. Click on "Cover Songs" to hear them, or on the YouTube logo on the right to see my YouTube channel.

Blogging. Who does it anymore, really?
When I started this blog back in 2008... whoa. Hold on while I let that sink in.
Yes indeed, I started blogging back when my beloved Celtics had just won a championship, before we had witnessed the brilliance of "The Dark Knight", and before Jessica Chastain found Osama bin Laden.
It's hard to imagine the person I was when I decided to pen these little posts a mere 5 years ago; (definitely in better shape, but without my glorious greying sideburns which have proven to be such a chick-magnet). What started off as a way to kill the time slowly turned into a favourite past-time of mine, and soon I was churning out over-the-top posts on everything under the sun as often as I could type them.
I 'churn' out much fewer posts these days; in fact, before today I hadn't even opened Blogger in 4 months. I like to think this is because I'm much too busy these days, but it's more likely because I have lost the taste for it.
So, to get to the point: it's time to shut down Darkside Daily for good. I don't want to be too dramatic about it, especially since I've 'left blogging' before. But at the same time, I don't want it to just go quietly into the night and be a remnant on someone's Google Reader Feedly feed, hence this post.
This blog has been a repository for all my thoughts through a tumultuous period in my life. It's seen me through incredible adventures, great sporting events, amazing movies, awful heartbreaks, introspective ruminations, several angry moments, happy moments and sad ones. In five years I've come a long way, and been through so much, it's almost impossible to encapsulate here without droning.
This won't be the end of me blogging, but just a new chapter. I think it's time I start anew, and leave behind the history of the 'headless pianist'. Those of you that know me will no doubt see me sooner or later blogging under my real name, with a much less cartoony blog name (what was I thinking...). I hope that by starting over, with a new leaf, I too will be able to explore and reflect on new things and new areas in my own life.
Finally, I just want to thank all the bloggers who made the 'blogging community' so interesting back when there was such a thing. Many of you have stopped blogging, but I have made friends with you outside of the murky world of Kottu.org, so this isn't the end or anything silly like that. Thank you all for your feedback on my posts and especially my music, which I feel has been shaped largely through your comments and suggestions.
So, until the next blog post..
The Darkside bids you adieu.
Posted by Gehan at Friday, October 25, 2013
Email ThisBlogThis!Share to TwitterShare to FacebookShare to Pinterest

I haven't been writing much of late, so I was rather unsure about joining up the latest trend on the Sri Lankan Twittersphere, which was the 55-word story challenges. Basically, every day the twitter handle @SriLankaDiaries spits out a word, and the writers have up to midnight to write a 55-word vignette around that theme. Simple, right?

Well, it's harder than it seems. For example, that first paragraph I wrote is exactly 55 words, and I barely even got into the point of this post. Imagine writing a small work of fiction in that?

Well, despite my abysmally poor time management skills, I've managed to write a few entries every now and then. There are some interesting works out there, and it's a fun and engaging writing exercise to break from the monotony of work these days.

Recently @SriLankaDiaries mixed things up and proposed a collaborative writing challenge, which would involve four writers to write 55 word vignettes one after the other to form one coherent piece of fiction. I was given the rather daunting task of being the fourth and final writer in my group, meaning I had to tie up all the story lines with my 55 words.

Needless to say, it was a bit of a challenge; thanks to writer no.3 for throwing a total curve ball in the story line (but admittedly making it all the more interesting). Here's the piece in its entirety. The word for the story was "poison".

Little Ashok lay under the bed in the dark terrified.

A car sounded in the driveway and he heard the voices of his nana and someone else in the hallway. She was screaming “YOU POISONED MY DAUGHTER!”

Suddenly there was silence.

He tiptoed in to the hall. He could see the bracelet he made for his mom broken all over the floor. He heard a familiar voice that he followed in to the kitchen. His dad was standing above his mother’s lifeless body, with a shining gleam in his eye. He started to move towards Ashok.

“Really, Lehan? That’s how you want to start your first novel? I’m certain your father wouldn’t approve,” quipped, Sid. This wasn’t the reaction Lehan was looking forward to, but made no attempt to defend himself. It could have been worse; his father would have just walked off and carried on drinking without saying a word.

And suddenly, Lehan had an idea.

Soon he was at his father’s house, watching him read his manuscript. His father didn’t speak, but his eyes showed contempt at his son’s “so-called profession”.

“Rubbish.”, he slurred, reaching for his drink.

Lehan watched him take the poisoned glass, picked up his pen, and prepared to start writing.

Thanks to fellow contributors @Shi_dreams , @gillian.nair and @rebelinpurple . You can see more short and sweet works of fiction at the Sri Lanka Stories site here. If you want to sign up for the challenge, simply follow @SriLankaDiaries on Twitter or drop them an email at srilankastories@gmail.com

Posted by Gehan at Wednesday, June 26, 2013
Email ThisBlogThis!Share to TwitterShare to FacebookShare to Pinterest

Well it's been a while, hasn't it?

This blog is slowly turning into a decaying holiday home that I can no longer afford to maintain, but perhaps a new cover will get me back into the writing vein.

I've been meaning to cover this song for ages, but I never got around to it until last weekend. A few found hours at home, and this is what turned out. It's rare to find a 'dance' song that has such good lyrics, but I'll put that down to Florence Welch's input (from Florence & The Machine).

Either way, it's actually a very haunting song when you listen to it, and hopefully that translates somewhat in this cover. Enjoy!

As always, the original is here, you can check out more of my videos here, and also my soundcloud page here.


Posted by Gehan at Tuesday, June 18, 2013
Email ThisBlogThis!Share to TwitterShare to FacebookShare to Pinterest

As you can tell, my blog posts are growing more and more sparse with every passing year. I wish that I could attribute this to work, but the truth is there really isn't much to write about of late.
Until now, that is. MAS is launching a tree plantation project on June 5th to celebrate World Environment Day. The project aims at reforesting 9.7 acres of land in Thuruwadula, Thulhiriya by replanting 1,400 trees by the end of 2013, using a technique known as 'analog forestry'. What this means, in short, is that it aims to restore the local biodiversity while providing economic opportunities to small-scale farmers.
The project is being handled by the MAS Environmental Sustainability Team and a Doug Adams team, and is probably one of the larger environmental projects being carried out in Sri Lanka in recent memory. 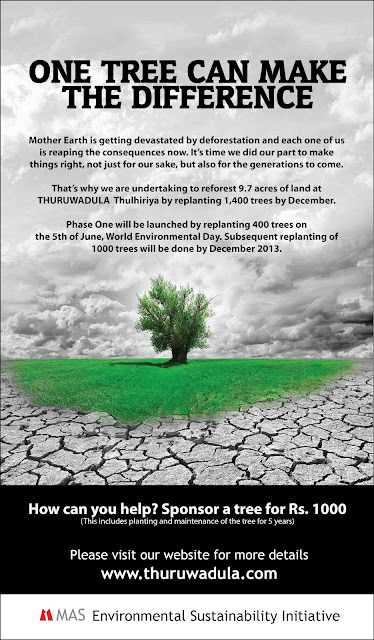 Now, here's where you can get involved as well. You can help sponsor a tree, along with the maintenance and care needed for it for the next 5 years, by making a one time donation of Rs. 1000 to the project. Further more, corporate financial sponsorship options are available, as well as options to sponsor sign boards at the location (roughly Rs. 10,000 per sign).
If you or anyone you know is interested, please send an email with your details and/or queries to the email addresses listed below, and they will assist in you making the donations for the project. Personally, I'm very excited about this, especially after witnessing the wanton destruction of trees in Colombo in the last 6-12 months. It's initiatives like these that need your attention to gain traction to undo all the wrong that we ourselves have done to this beautiful planet we call home.

The email addresses are listed below:

For more information regarding the project, please visit their website at www.thuruwadula.com .

Posted by Gehan at Wednesday, May 29, 2013
Email ThisBlogThis!Share to TwitterShare to FacebookShare to Pinterest

I spend way, way too much time on the internet.

This is probably not the best revelation to have about one's self, yet it is the sad truth. Most of my weekends at home are spent either attempting (and failing) to say no to Mom's cooking, or in front of the computer. Unlimited internet, especially when you work in the sticks like I do, is a luxury I must abuse when given the opportunity to.

However, last weekend my hours scouring the internet led me to a string of lovely live videos that I thought I would share with you all.

Singing and performing live is a special art, even for the accomplished performer. It isn't easy to get everything spot on with the lights, cameras and mics pointing at you, not to mention the eager audience, and that just makes these performances - in my opinion - extra special.

I love the original, which is a real rock masterpiece, but this cover almost makes the song rock out more. Fantastic, fantastic cover. The breakdown before the 3rd verse is just mind blowing.


Matchbox Twenty - You Won't Be Mine


One of my favourite songs from their second album, this hidden gem sounds even more haunting live. I recommend listening to their entire "Storytellers" set, it's really inspiring listening to how Rob Thomas wrote so many of his songs.


Boyce Avenue - We Are Never Getting Back Together (cover)


Everyone on Facebook is spazing out over the new Boyce Avenue cover of Justin Timberlake's "Mirrors" (which is great), but after listening to that song I stumbled onto this, a breathtaking cover of Taylor Swift's girl anthem. Absolutely love the harmonies here, great collaboration.

Brandon Boyd. Strings. Live. What more can I say? This is arguably better than the original.

I almost didn't want to add this, because it's THAT good (if that makes any sense). John Legend reworks Springsteen's classic into a soulful ballad, combining The Boss's heartfelt lyrics with his own immense talent. It doesn't get much better than this.


Any classic live songs you've stumbled onto? Link me up in the comments!

Posted by Gehan at Tuesday, May 14, 2013
Email ThisBlogThis!Share to TwitterShare to FacebookShare to Pinterest